A few years ago, my wife and I took my niece to the Winter Wonderland in Hyde Park. It was small, expensive, muddy and rather amateur. This time round we went to the new and improved version at the other end of the park. Boy have the organisers changed things!

There must have been two hundred or so little cabins selling chrismassy bits and bobs, at chrismassy prices of course… It was jam packed as we went on the first Saturday after opening. We went with my wife’s nephew and most of the in-laws but spent only half the time looking at the rides and stalls and the other half trying to keep an eye on where everyone else had wandered off to.

I took the camera hoping to get a few decent shots of wide-angle crowds but it ended up being a bit of a pain since the crowds were too dense and I was losing the light towards the later end of the afternoon. I did however manage to get a couple of really good shots of the nephew on one of the rides with the 55-200 VR using the Autofocus on Continuous. I wasn’t expecting it to work as well as it did as I’ve not really had to try it since most of my photography is either architectural or at least very slow moving.

As I lost the light I tried hand-holding for a few ‘fairground lights in the dark’ type shots, a couple worked out. Of course had I planned it properly and gone alone I would have taken a tripod and gone two weeks later when the crowds had died down but since I’m no longer in control of scheduling… 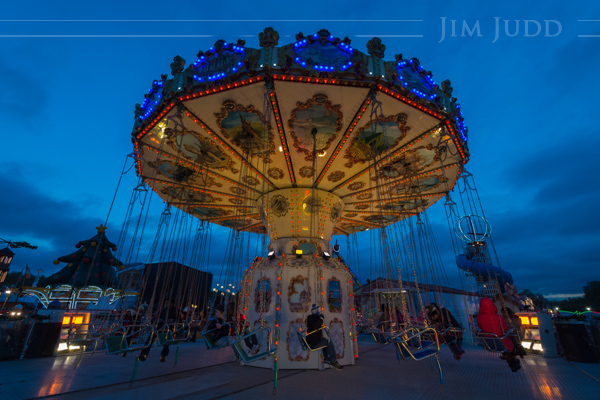