I hit the London streets a couple of days ago to try out a new ultra-wide lens during a lunchtime break. It was seriously cold and windy and with most people electing to eat lunch at their desks, I made the decision to get out to the relatively empty streets.

I’ve got my hands on a Nikon 10-24 DX lens. My first impressions were that it was quite blurry around the edges shooting at 10mm. It was quite overcast so I opened up wide to around it’s maximum aperture of 3.5 or so since I didn’t want to drop the ISO too far or the shutter speed since I was hand holding. I know that most lens don’t behave nicely near their extremes so I bumped the ISO and went to f8 and the edges cleaned up nicely.

You can get some major coverage with this lens at 10mm (about 15mm at 35mm equivalent) and you can produce some very strange converging angles shooting up at buildings. In the photo below, I would never have previously thought that I could have got a shot like that in such a confined small square but with the 10-24, no problem. 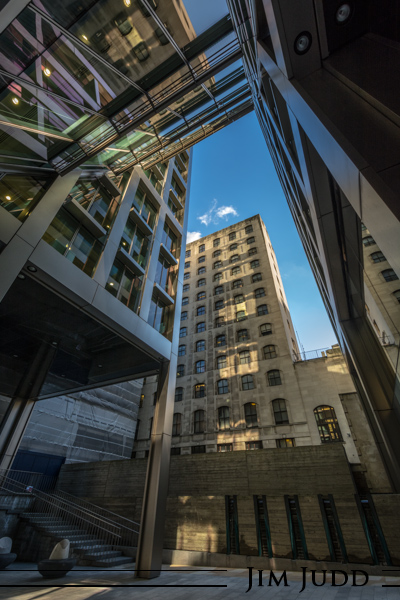